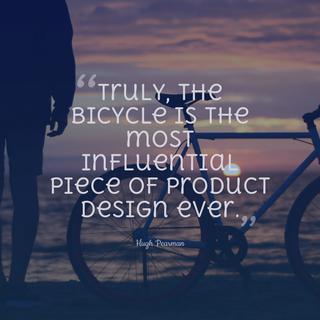 I find buying a bicycle is a great way to stay in touch with people.

Every time I see an adult on a bicycle, I no longer despair for the future of the human race.

Riding a bicycle is the summit of human endeavour - an almost neutral environmental effect coupled with the ability to travel substantial distances without disturbing anybody. The bike is the perfect marriage of technology and human energy.

Life is like riding a bicycle. To keep your balance, you must keep moving.

Riding a bike is everything to a cyclist. The friendship and camaraderie you have with other cyclists… to a cyclist, it was the be-all and end-all of your life.

Truly, the bicycle is the most influential piece of product design ever.

I began to feel that myself plus the bicycle equaled myself plus the world, upon whose spinning wheel we must all earn to ride, or fall into the sluiceways of oblivion and despair. That which made me succeed with the bicycle was precisely what had gained me a measure of success in life — it was the hardihood of spirit that led me to begin, the persistence of will that held me to my task, and the patience that was willing to begin again when the last stroke had failed. And so I found high moral uses in the bicycle and can commend it as a teacher without pulpit or creed. She who succeeds in gaining the mastery of the bicycle will gain the mastery of life.

It’s a risky business being a cyclist in the UK, there are a lot of people who really dislike us. It’s the Jeremy Clarkson influence – we’re hated on the roads. We just hope people realise we are just flesh and bones on two wheels.

Victoria Pendleton, gold medal winner in the women’s sprint at the Beijing Olympics, 2008

There is something about the miscreant cyclist that seems to get people more exercised than they are about the misbehaving motorist…When people get into cars, their metal encasement turns them into robots in our minds, and we’re grateful to them for any act of courtesy. We’re grateful that they don’t deliberately kill children, then laugh a rasping, metallic laugh…[Cyclists] are more civic-minded than anyone else travelling in any other manner, bar by foot. If they do run into someone, they at least (like the bee) do their victim the favour of hurting themselves in the process, which is why, if you had any sense, you’d save your hatred for the motorist, who (like the wasp) injures without care.

Bicycling…is the nearest approximation I know to the flight of birds. The airplane simply carries a man on its back like an obedient Pegasus; it gives him no wings of his own. There are movements on a bicycle corresponding to almost all the variations in the flight of the larger birds. Plunging free downhill is like a hawk stooping. On the level stretches you may pedal with a steady rhythm like a heron flapping; or you may, like an accipitrine hawk, alternate rapid pedaling with gliding. If you want to test the force and direction of the wind, there is no better way than to circle, banked inward, like a turkey vulture. When you have the wind against you, headway is best made by yawing or wavering, like a crow flying upwind. I have climbed a steep hill by circling or spiraling, rising each time on the upturn with the momentum of the downturn, like any soaring bird. I have shot in and out of stalled traffic like a goshawk through the woods.

Affordable, reliable transportation is no doubt one of the most valuable, but unrecognized tools of relief and development work there is. A bicycle is an industrial revolution in an individual’s life.

“When man invented the bicycle he reached the peak of his attainments. Here was a machine of precision and balance for the convenience of man. And (unlike subsequent inventions for man’s convenience) the more he used it, the fitter his body became. Here, for once, was a product of man’s brain that was entirely beneficial to those who used it, and of no harm or irritation to others. Progress should have stopped when man invented the bicycle.

I took care of my wheel as one would look after a Rolls Royce. If it needed repairs I always brought it to the same shop on Myrtle Avenue run by a negro named Ed Perry. He handled the bike with kid gloves, you might say. He would always see to it that neither front nor back wheel wobbled. Often he would do a job for me without pay, because, as he put it, he never saw a man so in love with his bike as I was.

Henry Miller, ‘My Bike and Other Friends’

It is by riding a bicycle that you learn the contours of a country best, since you have to sweat up the hills and coast down them. Thus you remember them as they actually are, while in a motor car only a high hill impresses you, and you have no such accurate remembrance of country you have driven through as you gain by riding a bicycle.

[A bicycle is] an unparalled merger of a toy, a utilitarian vehicle, and sporting equipment. The bicycle can be used in so many ways, and approaches perfection in each use. For instance, the bicycle is the most efficient machine ever created: Converting calories into gas, a bicycle gets the equivalent of three thousand miles per gallon. A person pedalling a bike uses energy more efficiently than a gazelle or an eagle. And a triangle-framed bicycles can easily carry ten times its own weight – a capacity no automobile, airplane or bridge can match.

After a long day on my bicycle, I feel refreshed, cleansed, purified. I feel that I have established contact with my environment and that I am at peace. On days like that I am permeated with a profound gratitude for my bicycle … What a wonderful tonic to be exposed to bright sunshine, drenching rain, choking dust, dripping fog, rigid air, punishing winds! I will never forget the day I climbed the Puy Mary. There were two of us on a fine day in May. We started in the sunshine and stripped to the waist. Halfway, clouds enveloped us and the temperature tumbled. Gradually it got colder and wetter, but we did not notice it. In fact, it heightened our pleasure. We did not bother to put on our jackets or our capes, and we arrived at the little hotel at the top with rivulets of rain and sweat running down our sides. I tingled from top to bottom.

I live on a bicycle…I live in central London, probably 90 percent of my travel is done on a bicycle. I love bicycles.

MOTORISTS: Cyclists are not another species – most of them drive cars at least some of the time – and they’re not, by and large, wilfully stupid or reckless. But they experience the roads differently from you…So be patient. After all, it’s not as if getting rid of cyclists is a realistic option now – there are too many of them, and the numbers are growing all the time. And a few years down the line, as petrol gets more expensive, you might well end up as one of them yourself.

A bicycle does get you there and more And there is always the thin edge of danger to keep you alert and comfortably apprehensive. Dogs become dogs again and snap at your raincoat; potholes become personal. And getting there is all the fun.